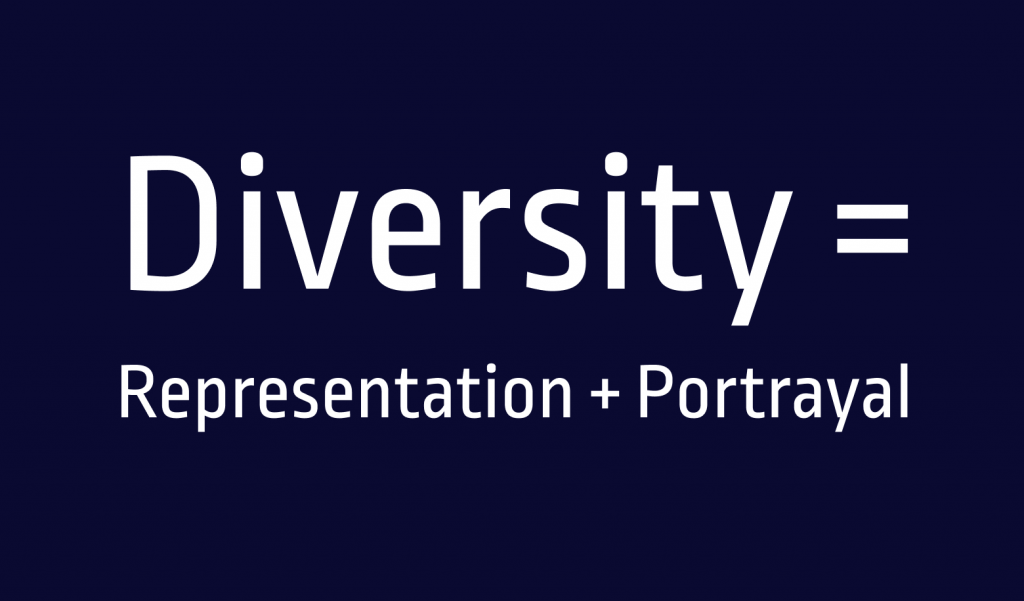 Ceretai is a value-based and mission-driven company. We aim to create a more equal and tolerant world, increasing diversity and equality by promoting conscious production and consumption of media and entertainment. (Did you know that we consume up to 10 hours of media every day? Of course this will influence us!)

In order to do this we have to define these terms more clearly. What is diversity and equality and how do you measure it?

Diversity in itself can mean a lot of different things. Only within the media industry it can refer to the variation of genres that are broadcast on a certain channel, the range of political views expressed by a newspaper, or simply the differences in opinion shown on a public TV station.

But it can also have the meaning it gets when you put it together with the word “equality” – suddenly it refers to social justice, sustainability, societal development and human rights. This is the kind of diversity we are talking about.

Diversity has two pillars. It is when all groups of our society* are represented to approximately the same extent as the portion of the community they make up, and when they are portrayed without being stereotyped.

Representation is measured in numbers. In media this can for example be done using the questions “how much air time do black people get on the news?” or “how many women are on this panel?” Unfortunately today, white, middle aged, cis men are heavily over-represented in media and entertainment compared to how big a portion of the world they actually make up. This presents us, the audiences, with a skewed image of the world and drives us to unconsciously make biased assumptions about this world, and about other people. And in fact, without fair representation we cannot have democracy – because representation is the very foundation of democracy.

Portrayal is much harder to measure, but it has to do with the following questions:

Representation is the foundation of democracy.

Naturally, in order to be able to understand and measure diversity, especially portrayal, you have to be very educated in social sciences. In our next post we will discuss how this should be done properly. But before that let’s try to answer the question: why these two? Why representation and portrayal?

Because they are what the audiences see. What builds our world is the lense we see it through; the truths we hold, the rules we obey, and the assumptions we make. That’s why our mission, to create a more equal and tolerant world, must start with the audiences. We ask ourselves: How much diversity is an average member of the audience presented with in their media and entertainment consumption? Is diversified content available to them and allowed to influence their view of the world?

Generation Z and younger are much more value-driven and willing to question inequalities than any generation before them.

The human brain works in simplifications and generalisations. Increasing diversity adds complexity. However, we believe it is counter productive for society to over-simplify the complexities around us by stereotyping and by limiting the variety of answers to the question “what does it mean to be human” – which is essentially what happens if I am only shown a white, male world through the lens of a white, male director. We also believe that humanity is ready to embrace, work with, and find answers to more complex questions than ever before. Generation Z and younger are much more value-driven and willing to question inequalities than any generation before them.

We believe that our definition of diversity can be applied to any other field outside of media and entertainment. Which groups of society are represented in your community, in your school, on your company’s board? And in which roles? In which way are they and their tasks portrayed by branding or PR initiatives, by the headmaster of the school, in the company’s annual report? These are questions that matter today, and that will matter even more tomorrow.